The inaugural Visualize This! Challenge received 125 expressions of interest from researchers across Canada and the United States. Participants had 31 days to create a visualization solution for an oceanography model contributed by an Earth Sciences researcher. The main challenge in the data was to visualize multiple 3D variables at the same time.

A University of Calgary (UofC) research team comprised of Allan Rocha, Usman Alim and Julio Daniel Silva has won first prize for their creative approach to using layering, animation, and elements of interactivity in their submission. A video of their submission can be viewed below:

“We started this project with a dream of being able to create layered visualizations on arbitrary surfaces to visualize multiple attributes, such as we can see commonly in 2D,” said Rocha, at the time a PhD Candidate and member of the Visualization and Graphics Group (VISAGG) and the Interactive Modeling, Visualization and Visual Analytics Research Group at the UofC. “These visualizations are inspired by concepts of painting and other aspects from art and information visualization. From this thinking process, the decal-maps emerged.”

The second annual Visualize This! Challenge asked participants to visualize a 3D fluid flow around two counter-rotating wind turbines. The provided dataset contained only one time step from the simulation, so participants had to create a dynamic visualization from the static data. We received many good submissions, with three most outstanding visualizations shown below.

The first place was taken by Jarno van der Kolk, a postdoctoral researcher from the University of Ottawa. Jarno’s visualization (shown below) was selected for its overall presentation, with a very informative voice-over. We especially appreciated the toy conceptual animation rendered entirely in ParaView and the use of programmable sources for rendering grass, the house, and the roof in the same scene with the turbine blades. The colour scheme for showing the wind speed was very nice, with red/blue indicating the flow which is faster/slower than the incoming air. Jarno’s visualization provided a clear explanation of what forces exactly drive the blades.

The second prize went to Nadya Moisseeva, a PhD student in the Department of Earth, Ocean and Atmospheric Sciences at UBC. Nadya’s work (shown below) was selected for its use of several innovative techniques in her visualization:

The third place was taken by Dan MacDonald, Thangam Natarajan, Richard Windeyer, Peter Coppin, and David Steinman, a joint team from the Biomedical Simulation Laboratory of the University of Toronto and the Perceptual Artifacts Laboratory of OCAD University. Their visualization (shown below) was selected for its unique use of Blender’s game engine to let a user walk through the ParaView-created scene, toggle the visibility of the various physical components, and for coupling the visual scene with the SuperCollider server to produce on-the-fly audio from selected Q-criterion under the microphone in Blender’s game engine.

In the third annual Visualize This! competition participants could select their dataset: a bio-molecular dynamics simulation or a rich set of linked humanities data.

Interaction of a large protein structure with a cell’s membrane

A simple visualization with VMD (below) shows the horizontal cell membrane along with the embedded vertical protein. To further differentiate the two, we rendered the protein beads as larger spheres. 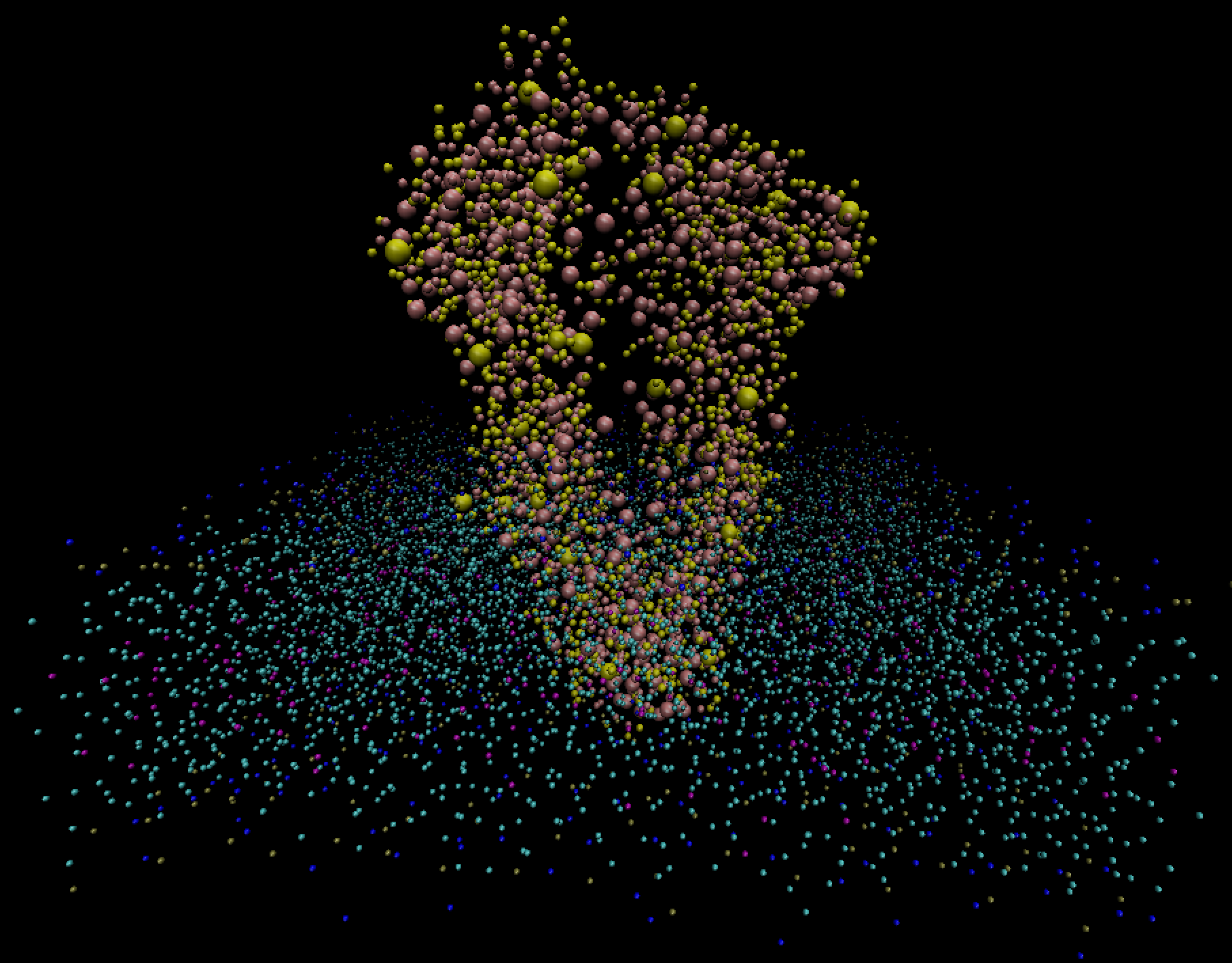 This simulation shows that the P-gp molecule acts as a lipid transporter protein, flipping membrane’s lipids from the inner to the outer leaflet. We asked participants to visualize this process, finding those lipids that bind to the protein.

The Orlando British Women’s Writing Dataset (Release 1: Biography and Bibliography) provided a rich set of linked open data representing women’s literary history from the beginnings to the present, concentrated on writing in English in the British Isles but with tentacles out to other languages, literary traditions, and parts of the world. The competition dataset contained 3,321,746 triples stored in the Resource Description Framework (RDF) format which is a standard format for storing linked data called graphs.

To get an idea of the type of information in the dataset, you can browse the Canadian Writing Research Collaboratory (CWRC) ontology’s competency questions. For the purpose of this competition, we suggested to address some more focused questions in the provided dataset.

The first place was taken by Philippe Nazair, a Data Visualization Developer at Université du Québec à Rimouski and part of the MERIDIAN consortium. Philippe’s visualization is implemented as a static website with two layers: a graph viewer using the 3d-force-graph web component, and a map viewer implemented with Leaflet to display markers on the map and written biographies from Cambridge’s Orlando author’s page found in the dataset. Below you can see a screen-capture video showing different interactions on this site. All JSON files for the visualization were created with a Python backend. We especially appreciated sample graphs for radical and liberal ideologies and other groups, as well as the ability to build more complex graphs by selecting a predicate and setting it to a certain value, e.g. hasActiveInvolvementIn = socialism, or multiple values; each graph is limited to one predicate. Individual graph nodes can be displayed as either text or draggable spheres.

The second prize went to Usman Alim and Roberta Cabral Ramos Mota from the Department of Computer Science at the University of Calgary. Below you can watch one of their visualizations (rendered with OSPRay in ParaView) showing the protein cavity and two highly-interacting PO4 beads with the colour representing time step. This work was selected for their skillful use of Python scripting for the bulk of the analysis: using MDAnalysis library for identifying closely interacting membrane beads, and writing bead positions in VTK to be rendered in ParaView. You can download an edited version of their Python analysis script here.

The third place was taken by Catherine Winters from the Digital Humanities Innovation Lab at Simon Fraser University. This visualization is powered by D3.js and Three.js, with all JSON data files produced with Python scripting. Not all features of this visualization are complete, so we are not showing it here, but it is likely to remain a side project in the lab over the next few months, with the promise to show clustering based on ideology, religion, or geographic proximity.